“One really should not look about the church. Yet all Catholics strive to decorate their churches and to adorn them with statues, stained glass windows and other objects of beauty. Primarily they are put there to give honour and glory to God, and, secondarily to excite devotion in the hearts of the congregation. So I fancy I must moderate the opening sentence.One should not look about for distractions, but one may look about in a devotional way. That really means we must not look at each other but we may look at the statues and windows. I suppose everyone who comes into our church sees the big window behind the High Altar.But how many can recognise the saints there depicted?

The window was erected in 1891 to commemorate the Golden Jubilee of the late Abbott Clifton. The window itself relates this but few can read the inscription at it is hidden behind the throne over the altar. 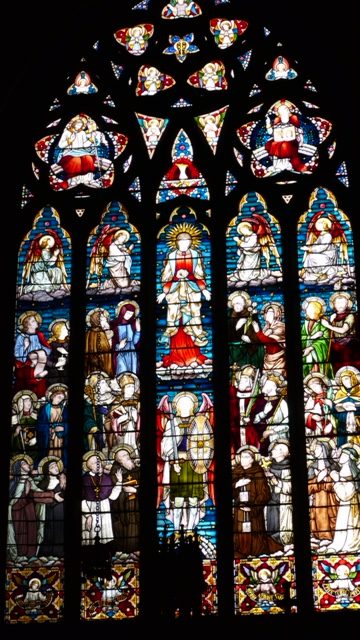 There are a good many angels in the window seven in the top niches and two rows of four each. The Holy Trinity is there. Jesus Christ with His cross The Holy Ghost in the form of a dove, and God the Father with the Alpha Omega, the first and the last letters of the Greek Alphabet. In the Apocalypse of John, God says “I am Alpha and Omega, the beginning and the end”. In the central panel as is suitable are the patrons of the church. Our Blessed Lady and the great Archangel St.Michael.

Only twelve saints out of the vast throng and any one will immediately call to mind other Saints who he or she would like to place there. But the Saints of God are above jealousy and we can be sure there is no strife in heaven because a certain Saint is not in our window. Now we fancy some of these saints are well known and some are hardly more than names to many. Most will remember Our Lady’s parents, Saints Joachim and Ann, and also that most fervent of penitents, St Mary Magdalen. A little thought too and the two other Mary’s of the Gospel , Our Lady’s companions during the passion are remembered. The four Benedictine Saints should present but little difficulty to this parish, St Benedictine, his sister St Scholastica, St Gregory the Great, Pope , Doctor of the Church, Statesmen and Apostle, and St Augustine who came from Rome over thirteen hundred years ago for the conversion Of this land. The spread of education should have familiarised many with the names of the saintly King Edward and the heroic Archbishop Thomas, for they figure in the ordinary history books. Who does not know the “Mary of Ireland” St Brigid or the girl martyr of Rome , St Agnes? But what do you know about St Monica and St Ursula? not a deal I fancy. Two beautiful saints and beautiful names. st Monica was the mother of another St Augustine. She is the patroness for wives whose husbands are not of the faith, for hers was pagan, and also for mothers of wayward children. St Augustine in his early manhood lived according to the flesh and even worse had fallen into errors of heresy. Oh but the wonderful power of a Mother’s prayers and tears. St Augustine’s after life in her glory. Mighty were his intellectual powers and the a church of God counts him among the greatest of her doctors. His writings are still in constant use and lucidity of mind has earned for him the title of Doctor of Grace.

St Ursula was an abbess. Some records say she had over two hundred nuns Living under her sway. It was during the time of the Danes , the sea rivers, who swept down on the land plundering and pillaging. Woe betide the matron or maid who fell into the hands of these lustful pagans. During the night a band of Danes attacked the convent. Rather then suffer dishonour, the legend tells us St Ursula and her nuns spoiled their beauty they mutilated their faces. The result was that the enraged Danes slaughtered the entire number. Thus the virgins of God preserved their virginity and earned martyrdom.
Space forbids a word about the great founders St Dominic, St Simon, St Clare, St Catherine and St Teresa. But the Catholic Truth Society have published cheap biographies of these and many other saints. They can be ordered at the piety Stall.”

These parish journals give the reader a nostalgic glimpse into the history of this beautiful church. Together with an in sight into the town of Workington and the shops and traders who sponsored the journal at that time.

The question whether an artist designing the accessories to a church, the sculpture, the stained glass, the paintings or furniture should conceive them in the same spirit and style as the architecture or, ignoring that, design them as entirely separate entities, is always with us. it seems unlikely to be answered, at least as long as we draw out inspirations from England, Byzantium, Italy, or Syria, from B.C. or A.D., from Christian to pagan sources, from the child or the savage or from nothing at all indifferently amid the applause of some band of enthusiasts who hail each new departure as the beginning of the “Modern” style. But the new windows at Our lady’s are a partial answer to the question; at least , the harmonize perfectly with the building in which they go. Rich coloured figures on coloured grounds under golden pot-metal canopies set formally on a grisaille background form the simple but effective design of the Great North Transept Window ( The Lady Altar Window ) and express the same spirit as the architecture of the ages of faith, not least virtue of which was the noble self restraint. The design of the window is simple, the lines are severe and once laid down are obeyed. But within the appointed lines free play has been given to rich colouring and delicate painting. The window is dedicated to Our Lady Star of the Sea, by which storm-driven wanderers find a safe harbour, and in whose honour the needle of the compass which points to the north still take the form of the fleur-de-lys. our lady crowned and with a sceptre in her hand and carrying her Divine Child appears as the star in the centre of the wheel window at the top; in the openings between the spokes of the wheel amid roses and lilies, are the emblems of some of her titles; the Gate of Heaven, the House of Gold, the Tower of Ivory, the Mystical Rose and the Ark of the Covenant. in the lights below are her relatives and friends on earth, to whom we pray that she may number us among them; St. Ann and St. Joachim, her father and mother, St Joseph, to whose care God trusted her, St. Elizabeth , and her son St John the Baptist, the first to hail her as Mother of God and St John the Evangelist, in whose person we were made her children. St Joseph carries the “St Joseph Lily”. St Ann the book from which she taught her exalted daughter the prophecies, which could only be fulfilled by her consent, St Joachim carries the shepherd’s crook of his humble calling. St Elizabeth who was old leans on a staff. St John the Baptist points to the “Lamb of God” and St John the Evangelist carries the palm of martyrdom and the chalice.

Besides this window, in the east wall, is a single light representing St Mary Magdalen. Being so close to the great window, the artist has kept the general lines of the design the same, but got contrast by changing the colour scheme panels of rich colour or grisaille, nit being smaller and nearer to the eye, the lines are a little freer and the grisaille has more detail and is broken up by small medallions containing half length figures. It represents the two great old testament figures who appeared in converse with Out Lord at the time of the Transfiguration, Moses and Elias