We are looking at ways of reducing our carbon footprint. One of which has been to install more energy efficient heating system.

We are seeking to involve parishioners in other activities which will raise awareness of the planet and the need to preserve it. Although the Parish already adopts some “Green” principles there is still much more that can be done!

Would you be interested in becoming our Champion in all things green – we would love to here from you? We are a very friendly bunch!

Please use the contact us page to get in touch and we will get back to you as soon as possible,

Bee Keeping within the Priory Grounds

A group of parishioners from our parish are training to be beekeepers……they have started meeting weekly throughout the winter for lessons, with a view to starting 2 hives of our own in the spring of next year….the group has also visited an actual apiary belonging to Alan James ( the course organiser ) see attached  pictures. The ladies were shown how to open an actual hive and examine the frames of bees to recognise the hive parts and the types of bees.

They will continue to learn the practical side of beekeeping and next year to set up and organise their own hives …….Hopefully they will get lots of honey!!!!!!!!!!! We will keep you informed of the progress we are making.

Despite the COVID-19 our parish priests have been busy preparing the rear garden at the priory for the bee hives !
They are also planning to grow some home produce such as potatoes and courgettes etc.

A special thanks to Clare Woowat for taking the time to update us on the progress of the Bee hives – see text below.

To BEE or not to BEE

The parish will soon have its own bee hives to raise honeybees and hopefully make honey.

We will have two hives in the parish, each with a colony of honeybees – a collection of insects that act as a unit – or a superorganism. Each hive has one queen and many workers – all female! (no surprise  there 😊  )

Over the last couple of months our small beekeeping team has been busy as bees to get everything ready for the arrival of our new residents.

All we need now are some bees!

These are due to arrive soon and have been reared by a beekeeper in Dumfries & Galloway. 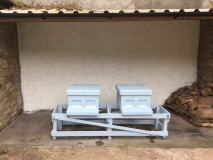 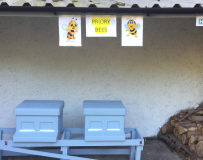 This has been an exciting week for our parish Priory Bees!

Fr Simon, latest recruit to the infamous border reivers, ventured around the Solway to just beyond Dumfries to carry out a raid and collect our honeybees. [Did you know that bees are one of the few live animals that can be posted? – in our case we had two large boxes, so it was safer to collect].

The boxes, each containing five frames of honeybees arrived safely although they were somewhat agitated after enduring a 2-hour journey in a dark car boot and there was a notable hum emanating from the boxes. Our team of novice beekeepers positioned the boxes (called a nucleus- a sort of temporary hive for transportation purposes) on the support frame in the same position that the permanent hives were to be located, then we opened the small hatch at the base of the box and stood back. Loudly buzzing honeybees burst from the base!

Soon there was a light mist all around our heads as the honeybees took to the air and began to familiarise themselves with their new surroundings. Within quarter-of-an-hour our honeybees were much calmer and after 30 minutes most had returned to their nucleus box. A few were still out and undertaking an orientation flight whilst others started to forage for pollen.

We let the bees settle for a couple of days and then we returned to transfer them to the hives which would be their permanent homes. Smoke was used to calm the honeybees before the nucleus box was opened and the five frames were then transferred one-by-one to the centre of the brood box (lower box) of the hive [brood box accommodates eleven frames so three empty frames on each side for the colony to expand into]. During the transfer we inspected each side of the frame as we sought to identify the queen. It was like playing ‘Where’s Wally?’ Even though the queen had a bright dot on her abdomen, all the striped bodies looked very similar. The coloured dot indicates the age of the queen. The queen in one hive has a blue dot (raised this year) and in the second hive, the queen has a green dot (raised in 2019).

In the photo, the queen is in the lower right-hand-side of the image. She has a longer slender abdomen that extends past her wings whereas the other (female) workers have wings that are longer than their abdomens. There were also a few (male) drones present – these are bigger than the workers and slightly squarer in shape.

Once we had transferred the honeybees, we introduced a feeder box containing a sugar syrup so that the bees had a source of food to sustain them between the bloom of the spring and the summer flowers. We are hopeful that this will encourage the bees to get crackin’ and start making honey stores.  😊

Although the bees are new to our parish, the queen and her workers have been busy on their frames for several weeks before they came to us. There is already evidence that the queen has been laying and creating her brood. This is important as she will need to build up a strong colony to gather stores and make honey to see them through the winter.

Having fed the bees, we left them in peace and we will check food supplies and inspect the health of the hive during the next week.

The queen bee can live for up to 5 years.

TO BEE OR NOT TO BEE ( continued _

This has been a busy couple of months for our parish Priory Bees!

In September, the bee inspector came to check our hives. We were selected as our apiary is one of those closest to the port. Bee inspectors are always on the lookout for any invasive species which may be harmful to honeybees. The bee inspector was very impressed with our apiary and admired both the good temper of our parish bees and the painted bricks, weighting down the hive roof, which matched our blue hives. She made many positive comments as we examined each frame eg beautiful comb, lovely dry, even brood, healthy larvae and calm bees.

Just as it’s not uncommon that a dog has fleas or a sheep has tics, bees are also pestered by a parasitic mite called varroa. These mites will live off the body of the honeybee and so weaken it. So what? If this happens there is a risk that the honeybees will be weakened and susceptible to other viruses or too weak to survive the winter and the colony may collapse.

The result of the inspection was that one hive (with the older queen) had lots of varroa present so needed treatment. The other hive, with this year’s queen, had much less varroa but still needed treatment to give the bees the best chance of being in good health to survive the winter. We were somewhat taken aback by this information but the bee inspector assured us that nearly every hive has varroa present.

However, we could not start the course of treatment on our bees until we had removed the honey as the treatment releases a vapour which would taint the honey.

No prizes then for guessing what our next job was– time to extract the honey. Another beekeeper from Cockermouth bee club allowed us to borrow his equipment, socially distanced of course. We just had to get the frames to him. So, one Saturday morning  found us removing the super (top) frames from the hive which the bees had filled with honeycomb and sealed with wax.

First, we had to brush the bees off each frame (don’t think our Cockermouth colleague would welcome the extra visitors!). Next, we had to scrape off the beeswax that capped the honeycomb cells, then place the frames into a centrifuge which was rotated manually. The frames in the centrifuge were inverted and rotated again to extract the honey. A tap at the base of the centrifuge vessel allowed us to drain the honey, via a double-sieve, into a plastic bucket with a further tap at the base. The honey had to settle for a couple of days so that any trapped air bubbles could escape. Then we invaded the kitchen at the priory, where we raised the bucket by the highly-technical means of standing it on a couple of pans and opened the valve to decant the honey into sterilised jars which had been tare weighed.

In total, we managed to fill fourteen jars with the liquid-gold honey. Considering our bees had only had 3 months in which to build up their colony and start making some honey, then this was a great result. We have attached our own labels which show the unique name and address of the honey and beekeepers. We’ve called it “Hallowed Bees Honey”.

Following the honey extraction, we have now applied the treatment to tackle the varroa so that the bees have the best chance of staying strong for the winter. Also, the queens have been raising bees that will live for six months, rather than the usual six weeks, and we have fed the bees a heavy syrup to replace the honey stores that we extracted.

By the way, after we’d put as much golden treasure as possible into jars, we scraped the bottom of the barrel and so sampled the golden treasure of our bountiful harvest. Best honey ever! 😊

Parish Bee update 15th July 2021 : Both our hives suffered over the Winter months resulting in hive 5 being reduced in size to a small nucleus hive. Hive six still had quite a lot of activity so it was hoped it would recover without any intervention. Recently, on one of our weekly inspections, we found the Queen from hive 5 dead, and no newly hatched replacement Queen could be found. So, we ordered via post a newly mated Queen together with 4 attendants who feed and groom her on the journey. We had to release these attendants without losing the Queen as their pheromones would cause them to be attacked by our bees. Unfortunately, when we opened the little plastic cage to release them, they all (including our expensive Queen) flew off! The new Queen (Winifred) had flown into the hive, and we were able to catch her. She was put into a little cage with fondant at the base, a hole was poked into the fondant so the hive bees would start to eat it and so release the Queen. This happens over a few days which allows the bees to get used to the smell of the new Queen and hopefully accept her. The hives were inspected on 13 July, the bees were busy bringing in pollen, we could see the Queen but there was no sign of her having laid any brood. We are hoping by next week’s inspection she will have been busy laying. Hive 5 had lots of activity and surprisingly some brood. We suspect that the old Queen from hive 6 had gone on her mating flight before settling into hive 5. We couldn’t see her but there was definite evidence of a Queen in the hive.